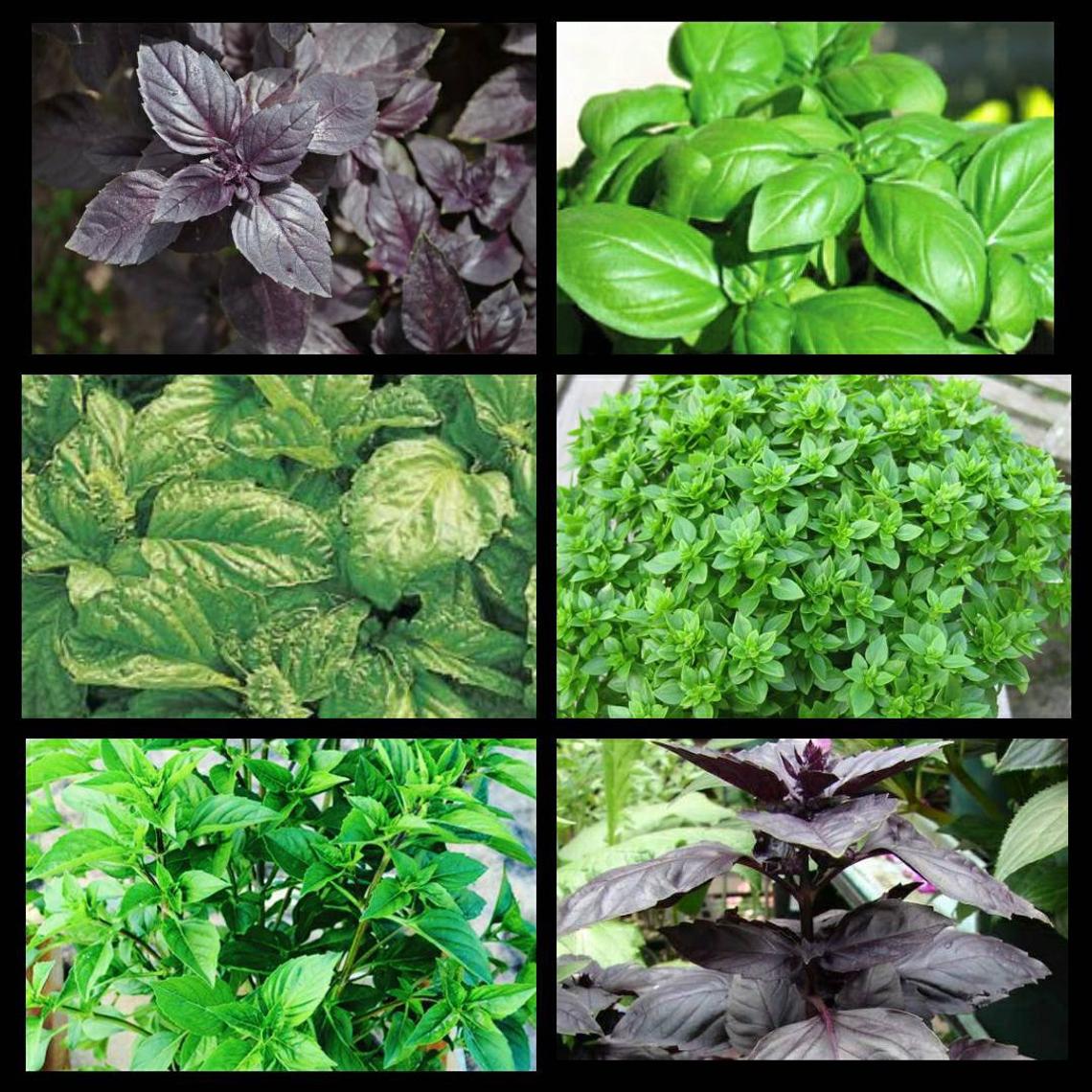 Sweet basil
Your basic basil, with large leaves and white flowers. The Genovese variety (names include ‘Sweet Genovese’ and ‘Genovese’ or ‘Genova Profumitissima’) is particularly nice, with a very pleasing flavor preferred for pestos. I’ve also found it a vigorous, luxuriant grower, slow to bolt.

Lettuce leaf (O. b. crispum)
A short, wide plant with thick, very crinkled leaves; slow to bolt. Other varieties include ‘Mammoth’ and ‘Napoletano’; ‘Green Ruffles’ is similar. The flavor is sweet, and not as strong as the other sweet basils, making it especially good for tossing into salads. The leaves can also be used to wrap fish, chicken or a rice stuffing for grilling.

These shorter varieties (‘Spicy Globe’, ‘Piccolo Verde’, ‘Fino Verde’ or ‘Fine Green’) bear small, narrow leaves with a sweeter, less pungent smell than the large-leaf types. It sounds like a great nuisance to pick all those tiny leaves off, but actually the stems are quite soft and succulent, so that you can chop up the sprigs, stems and all. The delicate flavor tends to wash out in long cooking, so add the leaves at the end or use them raw.

Opal basils
These O. basilicum hybrids include ‘Dark Opal’ (a 1962 All-America Selections winner) and ‘Purple Ruffles’ (also an AAS winner in 1987). The purple varieties can be quite beautiful, but they are far less vigorous growers and there has been a noticeable falloff in the purpleness of both the above varieties since their introduction, with more and more green or piebald plants. Breeders have recently begun a reselection process to produce seed stock for more purely purple plants. ‘Rubin’, released in 1993, is a reselection of ‘Dark Opal’ for a more consistent dark coloration.

Exotic Basils
Some of these are Ocimum basilicum, some are other basil species, and some no one really knows for sure. One name can cover many quite different varieties. Some are available as seed; others only as plants.

Lemon basil (O. b. americanum or O. b. citriodorum)
Generally has small, light green leaves and a distinctive lemony aroma. O. b. ‘Mrs. Burns’ is a more vigorous selection with larger leaves and a powerful lemon scent. Try it in pesto, salad dressings, sauces, fish dishes and desserts.

Thai, East Indian, Puerto Rican and Cuban basils are among those gathered from other parts of the world, and often expressly suited to creating the flavors of their local cuisines.