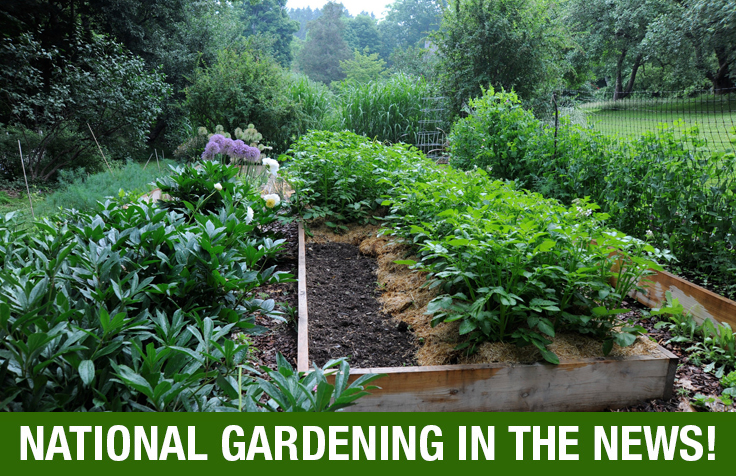 By Margaret Roach — June 3, 2020
If you don’t have a succession plan for your garden, there’s still time to make one. Here’s what it is and why you need it.
You’ve planted the vegetable garden; the beds are increasingly full. But before you check that task off the list, take a closer look. The cilantro and lettuce are trying to tell you something: Once is almost never enough.

There will soon be vacancies, as some crops — those that are quick to mature or don’t tolerate heat well, or both — pass their prime.

Tomatoes, eggplants and peppers are generally planted just once. But other crops need sowing again and again to keep producing. Are you ready with more seeds — or better still, a homegrown supply of fresh transplants selected for summer right through fall harvest — to plug into every precious bit of available real estate?

This is succession sowing, an advanced level of vegetable-garden math.

The introductory lesson simply required calculating when it was safe to sow or transplant certain crops outdoors. Once you’ve mastered that, you need to learn which crops lend themselves to resowing, and how often, to insure a steady supply of vegetables over the longest possible season. You’ll also need to estimate how much available space there will be and figure out how to assign various plants to those empty spaces in an ongoing planting plan.

Friends who were working on their crop plan one long-ago winter taught me this. As farmers, their livelihood depends on maximizing every square foot of ground under cultivation. For each portion of a field — the equivalent of a garden bed — they made a simple chart, identifying three or four possible uses and assigning each planting an approximate date. Where the April-sown spring peas came out, the bush bean seeds could go in, followed in late summer by a fall root vegetable like beets or carrots.

The Goal Is the Same Everywhere

Getting the most out of the space is your goal, no matter where you’re gardening. But dates and plant choices vary in regions with shorter or longer frost-free seasons, or with extreme summer heat, which might be inhospitable for something that works farther north.

In the Hudson Valley, I sow successions of bush beans from mid-May until late July. If I were in North Carolina, I could sow from mid-March until mid-June, and then again from August until mid-October. Calendars and other guidance, with an emphasis on the latest possible season-extending plantings in climates as varied as Maine and Florida, are rounded up here.

List your wished-for crops, matching choices to any found spaces.

What can be planted in succession? In my Northeast garden, the possibilities, even well into summer, might include arugula, basil, bush beans, beets, braising greens (mustard, kale, collards, Asian greens), broccoli rabe, carrots, chard, chicory, bush cucumber, collards, dill, kale, lettuce, radishes, peas, scallions, spinach, bush summer squash and turnips. Broccoli, cabbage and cauliflower that I started in flats in May could be transplanted at about a month old. Many annual flowers can also be succession-sown for late summer and fall display or bouquets.

Check the Seeds on Hand

Compare your wish list to seeds you already have — or place another order quickly. It’s unlikely that local garden centers will have transplants in stock, but they may have seed packets and seed-starting mix.

Use a Mix of Tactics

The best possible succession system uses various tactics. The most straightforward way to produce more cilantro, chard, bush beans, arugula or lettuce, among other possibilities, is by repeatedly sowing a small amount in a dedicated area.

In spring, I set aside space that could accommodate a few successions, but sow just the first, in a portion of that row. Two (or, for the beans, three) weeks later, I sow the second stretch. By the time I sow the third, I’ll probably be harvesting or even pulling the first, and could reuse the first space for a fourth sowing or for planting something else.

In other spots, I follow one crop that’s ready to be pulled with a different one. So my plan would call for growing early spring spinach to harvest before the tomatoes are transplanted there, and planting garlic in that space in October after pulling the tomatoes.

Here’s a sort of hybrid of the first scenario: Sow two or more varieties of the same vegetable at the same time, choosing ones with a different number of days to maturity listed in their descriptions — for instance, baby carrots (about 50 days) alongside a larger carrot (around 75 days). I do this with peas, giving part of a 20-foot row to Sugar Ann, which produces about 10 days earlier than the taller snap peas that get the rest of the row, then yield longer. I repeat the planting in July for fall harvest.

But even a single variety can do multiple duty. That pea planting, for instance, could be extended to include a section of seeds sown more thickly, intended for harvest at four or five inches high as pea shoots, for salads or stir fries, with the left rest to mature to pods. A portion of a row of kale could be harvested as baby-leaf for salads, and the same with lettuce, with that section resown for more of the extra-fast young version of the crop.

When you’re seed-shopping, make sure to scan the descriptions for mentions of heat- and cold-tolerance and match the variety to the season you plan to grow it.

Some spinach varieties were bred for improved summer performance, and Batavia or summer crisp lettuces generally stand up well compared to others. With cilantro, there is actually a variety named Slow Bolt that resists the urge.
For the fall harvest at the far end of your growing plan, seek varieties that can take a little cold. (But also have a piece of insulating row-cover fabric nearby, just in case.)

For later sowings, choose faster-maturing varieties and adjust the expected time to harvest for the shorter day length. Days will be gradually decreasing as the latest-sown crops mature, meaning slower growth and longer time to harvest.

My identical row of spring-sown peas will probably mature faster than the one I sow in July for fall picking. I calculate when to sow them by adding about two weeks to the expected days to maturity listed on the packet, hoping not to bump into fall frosts. Some varieties won’t work; I wouldn’t choose a big 70-day radish up north as my latest sowing, but rather a small one that matures in half that time or less.

A note about days to maturity: Nobody interprets this exactly the same way, so it’s solid guidance, but not a guarantee. With some crops, it’s an estimate starting from germination after direct-sowing in the garden; with others, from outdoor transplant time of a seedling that you may already have invested four or more weeks in. It’s helpful for identifying fast-maturing varieties over slower ones, and as an approximation of how much time to figure each garden space will be occupied by a particular crop.

Take into account the direction the sun moves: Avoid planting on the shady side of tall plants like tomatoes or a trellis of pole beans, unless it’s a strategic move meant to give heat-haters like lettuce a bit of afternoon shade in the hottest months.

For the most efficient use of space, start seedlings in flats. Because their infancy doesn’t take up precious square footage, transplants are in the garden a shorter time than direct-sown plants and are more space-efficient.
Plus, sowing seeds in hot, dry garden soil can be challenging. With those you plan to sow directly, like radishes, beets and carrots (because root crops generally don’t transplant well), have a piece of burlap at hand to keep the moistened seedbed from baking before germination.

Planting crops in succession can sometimes outsmart vegetable pests and diseases. With any crop vulnerable to common garden pests like cucumber beetles or squash bugs, I always make two sowings a few weeks apart, and not right next to each other. One or the other planting will hopefully miss the peak moment in the insects’ feeding cycle, especially if I remove the eggs they lay (usually underneath leaves) every morning, and also get rid of any adults that manage to find the plants.

Cheating sometimes is acceptable. I have been known to steal space for a short row of baby lettuce or arugula between tomato cages before my transplants grow in, or even to plug in one kale or broccoli transplant over here and one over there when small pockets open up, long before I have space anywhere for multiples.

Like the plants you select and the timing of your succession plan, the choice of which cover crop to use and when is region-dependent. Your Cooperative Extension office website can probably help — and may be able to point you to a locally appropriate succession-sowing calendar.

This article was adapted from a column on awaytogarden.com.